I make neck rests mainly but not exclusively for recumbent trikes. Each is 2" thick memory foam fill on a gently curved PVC base. The covers are breathable and water-resistant. Embroidery options are nearly limitless and allow you to truly personalize this part of your trike.

If you're interested in more information about Finer Recliner accessories, pictures, prices and how to order, you can reach me at stevesussman@earthlink.net.

The days are definitely getting longer, the owls are everywhere in the evenings and early mornings and I haven't been riding even once since about Thanksgiving.

Seems like The Finer Recliner has turned me from a rider into a fabricator.   Well it's really not that simple, and lest I sound like I'm complaining, I've also got a slow-build of an Atomic Zombie to-be-electrified Timberwolf going on in the shop too, and a bunch of other fun distractions so this situation really is a choice.

Another choice I've decided to make has to do with this blog.  Before I had the website up and running (www.TheFinerRecliner.com) I used this blog as a way to advertise the gear.  Now that the website's working I'm trying to keep it current by adding new pictures and making edits that hopefully make the site more attractive and user-friendly.

I'm actually not so interesting, nor is my ego so large, that a blog AND a website are required to present the depth and breadth of my musing and insights.  Plus we've back to 'lack of time' issue.  So I've decided I'll leave the blog up in case I change my mind at some later date, but for now if you want to check in come visit my website.  I've been posting most new stuff in the Gallery at the end of the site.  Feel free to send me stuff to post as well. 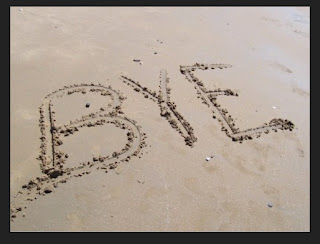 In the Northwest Fall is a verb.  It happens quickly...first that faint smell in the late afternoons, then a slight briskness in the evening air.  There are more alder leaves in the pasture now then there are on the trees.  The days are still sunny and warm but the nights are frosty.  The air smells like apples and the soft sounds of trodding on grass have been replaced by the crunching of brown leaves when Travis and I play ball in the pasture.  Penni's garden has been a bounty of corn, kale, peas, lemon cukes, squash, potatoes and now truckloads of tomatoes. 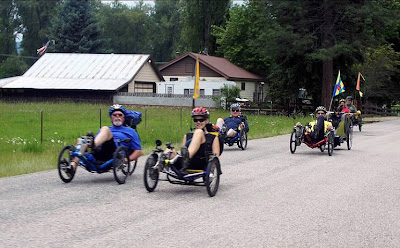 Even though Fall arrived quickly its really been a nice long and beautiful summer.  TOT was one highlight...aside from the great company, wonderful riding, and a rare day-long nap during the downpour, I thought the jerseys turned out so especially nice I bought two.  See Travis in the trailer?

But even with a long, warm and sunny summer, a ton of other projects and events interfered with getting much riding in after we got back from Idaho.  Penni's daughter Lauren was married in Corvallis at the end of July.  Penni wanted to help Lauren with the preparations so we got there a few days before the wedding.  That gave me time for a 65 mile ride on the GLO exploring the beautiful rolling countryside around Corvallis.  It was my first ride on the GLO where I was out on country roads rather than bike paths.  And it was a good chance to try my neck rest which I'd installed after I couldn't get the stock GS neck rest to fit me.  The trike was a delight...comfy, quick and maneuverable.  A very different ride from Msafiri...my Expedition.  I really love them both, and I'm feeling lucky to have the choice.

After only about 10 years it appears I finally got the pond finished that I've been building, re-building and re-re-building right behind our house.  With all the re-do's I use that term "finished" lightly.  How unfair that the universe can simply make a depression in the earth which fills with water and creates a beautiful pond when I've labored for 10 years, moved tons of earth, rock, about 2 tons of bentonite and at least that much gravel to make my pond and waterfall vision until I've finally reached a compromise with the local environment giving me a pond that actually holds water and a waterfall that burbles like a brook.  Amazing what you can do with 90 50# bags of bentonite. 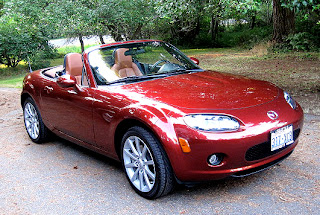 This was also the summer I'll remember as the attack of "Old Guy Syndrome."  Honestly I don't know how it all started but it was intense, it was brief, all the stars were in alignment (1.9% financing readily given) and the result is now sitting happily in my workshop from where it comes out only on sunny days.  It's a 2008, the last year of the body style I like best, and had only 27,000 miles on it.  The three I looked at before choosing this one had surprisingly all been traded in for the same reason - SUV's.  That's when I decided buying this was clearly an old guy thing.  Obviously I couldn't say it was my mid-life crisis...hell I'd had that 25 years ago when I was living in Minneapolis, built my first Tour Easy clone and spent two months riding it out here to Seattle.  So the Miata's now nestled in the shop so even when the weather's lousy I can put the top down, sit in the car, turn on some music and dream of warm sunny summer days. 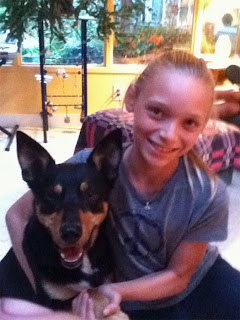 Then right before school started my son Josh, daughter-in-law Hayley and my grandkids Sophia, Henry and Sammy spent a week here the end of August.  As usual they timed their visit to coincide with the peak blackberry harvest.  They weren't out of the car 5 minutes before they were off picking and eating...actually eating and picking.  They were obsessed with making blackberry pies.  As the baking prep mayhem unfolded in the kitchen with the buckets of berries, my 97 year-old mom sat at the table insisting her mother said pie crust should be handled as little as possible.  All the while the kids played with the dough like it was clay...rolling it, balling it up, gushing it between their fingers, tossing it at each other.  Still, when the pies came out of the oven and were slathered with ice cream no one complained about the crusts.  They sure tasted good to me, and from the looks on all the purple faces sitting at the table (Travis' too), everyone was more than delighted. 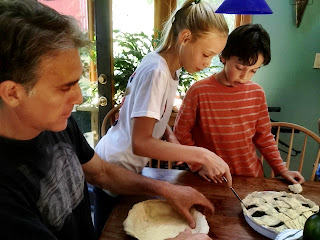 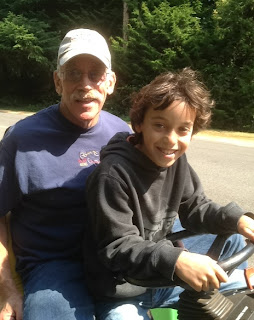 We had a great time driving the tractor around the pasture, playing ball, and hanging out at the beach. 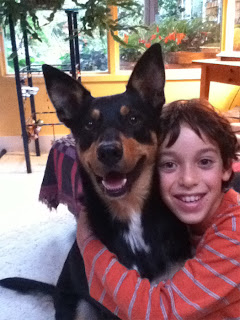 Travis was in heaven having 4 more people happy to play ball with him any time of the day or night. 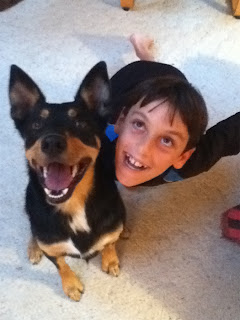